In his last official engagement before the lockdown, Great Uncle Bulgaria made the trip from Wimbledon common to donate a set of Womble books for the Maesteg library – and officially open the new shop.

“Like everybody else I love a bargain” he announced, “and I’m urging all young Wombles in the Maesteg area to visit this wonderful shop.

“It’s also nice to see the good people of Maesteg have the chance to donate unwanted items to the shop rather than put them in a skip. I wish every recycling centre had one of these.

Welsh Assembly member Huw Irranca Davies added; “I’m a big fan of the wombles who have been promoting the reuse message for five decades.I hope parents who remember him pass his important message onto the next generation.”

Bridgend Council leader Huw David also lent his support: “There’s been great interest in this new facility at the Maesteg recycling centre already – people are keen to cut back on their waste and see things used again if possible, and I’m sure that’s something Great Uncle Bulgaria would approve of.

“The shop forms part of our ongoing efforts to increase recycling in the county.

“We are currently the second highest local authority in Wales when it comes to the amount we recycle.

“Bridgend county borough’s latest recycling rate is 69.4 per cent which places the local authority in second place in the Welsh recycling table, just behind the Isle of Anglesey at 69.9 per cent.”

Wastesavers, are running “The sidings” shop in partnership with Bridgend County Borough Council and Kier. 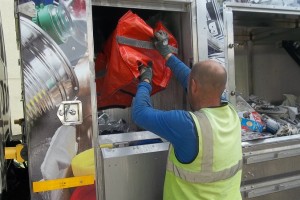