January is traditionally the busiest month of the year for food waste collections and 2015 saw our record “harvest” of 454 tonnes!  Last January (2014) we collected 422 tonnes over the same period.

To give some scale on this, that’s one large 40 foot articulated truck collected every day.

Wastesavers has been collecting food waste on behalf of Newport City Council since 2010. We estimate that more than two thirds of households in Newport put their food waste out for collection on a regular basis. That is above the UK average but still a long way off Newport’s current 85% participation rate for general recycling.

Even with a relatively low participation rate the monthly average food collection has steadily increased. 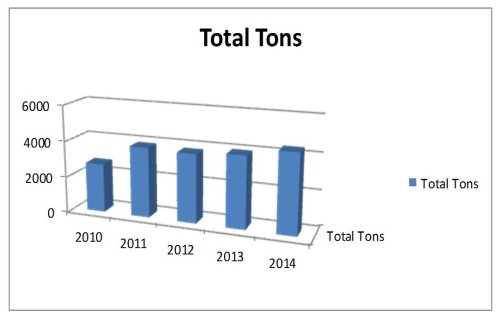 As far as we know there has been no significant change in the average production of food waste in Newport over these last four years. This is not a case of people drinking more tea (tea bags go in the caddies), or eating more vegetables (peelings) or meat (bones go in the caddies).

The increase is probably down to other factors; greater awareness, increased numbers participating and/or an increase in food recycling by those already taking part.

However, the reduction in the size of refuse wheelie bins across Newport in 2014 was, we believe, a major factor in the significant jump last year (329 tonnes to 364 tonnes per month average).

The food waste we collect currently goes to New Earth Solutions in Gloucestershire. Here it is shredded and put into huge rotating cylinders that are kept at a very precise temperature for several days. This effectively pasteurises the shredded food waste and it emerges much drier and free from smells.  This dry mix is then placed in large piles outside and after a few weeks it turns into compost that is sold to farmers.

We sometimes struggle with the term “food waste” because it implies wasting good food when in fact we are talking about what’s left over – tea bags, vegetable peeling, bones. With this in mind we all produce some food waste, even if only small amounts. We know some households compost at home – and that is great but we have no way of monitoring that.

Our latest advertising campaign is aimed at encouraging more food recycling because we believe it makes sense. Food waste turns into the smelly part of waste if it’s left in black bags with the other rubbish. If kept in a food caddy and put out every day or two it does not smell – and that’s good for everyone.

You can order you free food recycling kit here. 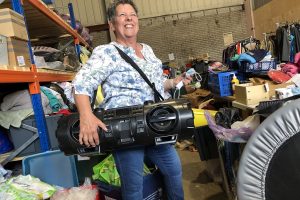