Today (20th September 2019) schoolchildren all over the world are going on strike to demand adults take climate change more seriously.

Whether you agree or not with this kind of action the kids do have a point. Climate change is very real, the science is all there, and let’s be frank, it will affect them more than most of us reading this.

And what has this got to do with recycling? Recycling saves energy reducing the amount of greenhouse gases we are pumping into the atmosphere.

Every tonne of plastic we collect and recycle saves 2.5 tonnes of CO2 going into the atmosphere. With aluminium its a massive 18 tonnes of CO2 saved over producing the stuff from new. And the list goes on.

Recycling is obviously only one small part of the equation to reduce climate change. But then again so is going in your car; flying to Spain for a holiday; leaving the heating on when your not at home.

To put some context on this- here are some graphs (with thanks to the Guardian newspaper who sourced these) to illustrate what is happening.

The problem – rising carbon dioxide in the atmosphere

The level of CO2 has been rising since the industrial revolution and is now at its highest for about 4 million years. The rate of the rise is even more striking – the fastest for 66m years – with scientists saying we are in “uncharted territory”.

Billions of tonnes of CO2 are sent into the atmosphere every year from coal, oil and gas burning. There is no sign of these emissions starting to fall rapidly, as is needed.

The planet’s average temperature started to climb steadily two centuries ago, but has rocketed since the second world war as consumption and population has risen. Global heating means there is more energy in the atmosphere, making extreme weather events more frequent and more intense.

Greenland alone is now losing almost 4 trillion tonnes of ice per year. Mountain ranges from the Himalayas to the Andes to the Alps are also losing ice rapidly as glaciers shrink. A third of the Himalayan and Hindu Kush ice is already doomed.

Sea levels are inexorably rising as ice on land melts and hotter oceans expand. Sea levels are slow to respond to global heating, so even if the temperature rise is restricted to 2C, one in five people in the world will eventually see their cities submerged, from New York to London to Shanghai.

The upside (I) – wind and solar energy is soaring

Huge cost drops have seen renewable energy become the cheapest energy in many places and the rollout is projected to continue. Analysts also expect coal use to fall. But much government action is still required to reach the scale needed, and solve difficult problems such as aviation and farming.

The global fleet of electric cars and vans is still small compared with those running on fossil fuels. But sales are growing very fast. Electric cars are cheaper to run, suggesting they will become mainstream.

This summer Newport reached just under 70% recycling rate. This makes us one of the top recycling cities in the world. Residents are doing their bit – a small step but at least its a start.

This is just a starting point – no room for complacency. 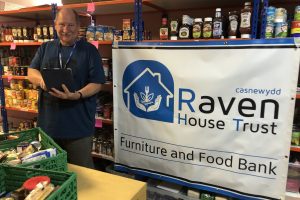 ONS donates IT to Newport charities