Our over 50s Digital World programme is gathering pace with more than 20 participants in the first quarter.

“Most of the people coming have found themselves made redundant after years of working – often as industry in Newport has shut down” explains Emily Cottrell, Social Programme Coordinator at the  Reuse Centre. “They all want to work, they hate being on benefits and they hate feeling like they’re not contributing to society” she continued. It’s a stark contrast to the way some sections of the media portray people claiming benefits.

When you’re over 50, being made redundant, or just trying to get back into the job market after even a short break, can be a daunting task. If you’re not up to speed on the current digital revolution it’s easy to feel bewildered.

Just finding your way around job sites requires knowledge of how the internet works and how to use search engines.  It may seem relatively simple while you read this – but think how many steps it took from turning on your computer to reach this point. 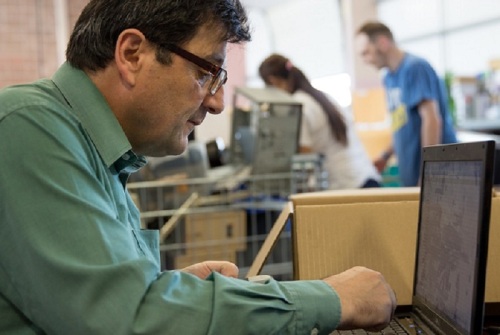 And once you’ve found the potential job filling out forms online can be difficult in itself – but there’s also a lot of badly laid out job application forms out there and you sometimes need to know your way around programmes like Word just to make it look OK.

Not everyone on the programme, however, has been made redundant.  Gena from St Julian’s, for example, had been a housewife since 1984, but wanted to return to work.  “I found the training really helpful and it’s boosted my confidence when applying for jobs,” she said. “I’ve now got a CV for the first time ever, and feel I’m much more up to speed with computers and understanding what employers are looking for these days.”

The project uses refurbished computers supplied by the Reuse Centre. In the last two months the Centre has refurbished and recycled more than 600 units from businesses and institutions across south east Wales.